Over the last decade, increasing attention has been paid to how biased data can impact individuals from marginalized groups. A new paper published last week at the 2020 ICML conference by Elisa Celis, Vijay Keswani (Yale Statistics and Data Science), and Nisheeth Vishnoi (Yale Computer Science) provides a novel pre-processing approach for preventing adverse impacts of biases in data in downstream applications.

The confluence of two major issues in computation and society motivate this work: the long standing struggle to dismantle discrimination against marginalized groups in society and the rise of data-driven automated decision-making in important social applications. As recently as June, the Supreme Court ruled that the Civil Rights Act of 1964 protects gay, lesbian and transgender employees from discrimination based on sex, extending legal protections related to disparate impact and the 80% rule to the LGBTQ+ community. And yet, major datasets like the U.S. Census can undercount black and Latinx people, leading the government to under-allocate funding for resources needed by those groups (see the infographic from the FiveThirtyEight article below). Additionally, COVID-19 data may be affected by biases; according to FiveThirtyEight, less than half of all data on COVID cases includes race and ethnicity information and news organizations have documented widespread issues with official death counts. Celis et al’s paper provides a new framework for debiasing data and mitigating disparate impact.

According to an analysis by FiveThirtyEight, the Census undercounts black and Latinx children at greater rates than white children.

The main contribution of the paper is a framework for finding a “maximally noncommittal” distribution which closely resembles the distribution induced by the data while ensuring proportionate representation and/or other notions of fairness. And whereas previous similar methods for debiasing data have been prohibitively slow for datasets with large domains, learning the distribution for the new framework can be done efficiently; it takes time polynomial in the dimension of the data.

The methods described in this blog post are preprocessing methods which remove bias from data before machine learning algorithms are trained. However, it should be noted that even if the data is unbiased, there is no guarantee that the algorithm or downstream application will be fair. See this post in Suresh Venkatasubramanian’s Algorithmic Fairness blog for a helpful discussion of this topic. Hence, this is an important step that can be used in conjunction with other tools when designing a just system.

In the fairness literature, there are two established approaches for debiasing data: modifying the dataset or learning a fair distribution. Fair data is ensured using fairness constraints, or mathematical statements encoding some formal definition of fairness. See this post for context on many types of fairness constraints.

Following the principle of maximum entropy, the framework produces a max-entropy distribution with a prior distribution determined by reweighting the data points and a carefully chosen marginal to satisfy fairness constraints.

To modify a dataset to satisfy fairness constraints, one can either reassign the protected attributes of some data points or reweight the frequency of data points to satisfy fairness constraints. (See this post for a walkthrough of how this might work in practice.) These approaches are often computationally efficient, but there is no way to generate new data points. As a result, machine learning models trained on the data can fail to generalize. (See Chawla’s “Data mining for imbalanced datasets: An overview” in Data Mining and Knowledge Discovery Handbook for an overview.)

Alternatively, one can learn a distribution which is close to that induced by the data points while satisfying fairness constraints. (See this 2017 paper by Calmon et al for an example of this approach.) This approach allows machine learning models to sample from the learned distribution, with the potential to learn greater generalization from the data. However, past research on fair distributions has produced algorithms which run in time exponential in the dimension of the data; thus, they can be infeasible for large datasets. 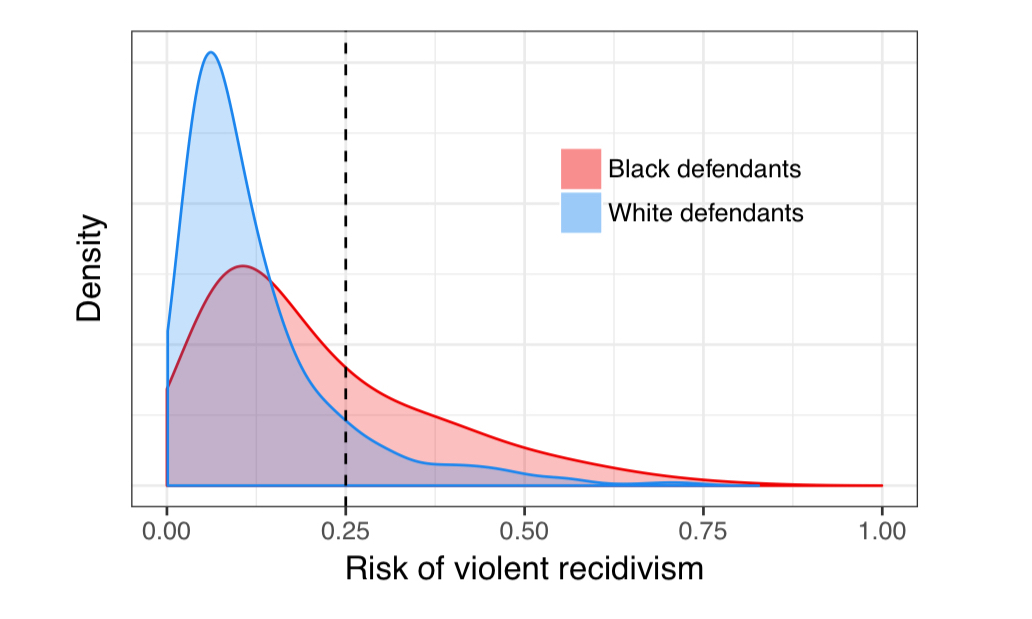 An empirical distribution of violence recidivism by race demonstrating how disparate impacts in algorithmic sentencing decisions might occur. See this excellent blog post for a longer discussion of the need for computing fair distributions.

The algorithm from Celis et al’s paper combines the two approaches above. Following the principle of maximum entropy, the framework produces a max-entropy distribution with a prior distribution determined by reweighting the data points and a carefully chosen marginal to satisfy fairness constraints. It overcomes the infeasibility issues of learned distribution approaches for large datasets by providing an algorithm which runs in time polynomial in the dimension of the dataset.

Next, we discuss the maximum entropy framework, why it is an appealing tool for debiasing data, and how it can be efficiently computed.

Maximum entropy distributions make the fewest assumptions about the data

For a given set of data, there may be many distributions which can encode the data. The principle of maximum entropy says that the distribution with the maximum entropy relative to other possible distributions is the one that best represents the current state of knowledge: it is “maximally noncommittal” in the sense that it makes the fewest assumptions about the true distribution of the data. This principle has its roots in the works of Boltzmann and Gibbs, and E.T. Jaynes, when he was working on questions in statistical physics, first advocated for the approach.

Max-entropy distributions have been studied across many applications as a density estimation method. They also have other desirable properties:

Now that we understand some of the desirable properties of the maximum entropy framework, let us go into some of the mathematical specifics of maximum entropy distributions, starting with a definition. For simplicity, we will just discuss the case when the domain \(\Omega\) is \(\{0,1\}^d\).

Given prior distribution \(q : \Omega \rightarrow [0, 1]\) and marginal vector \(\theta \in [0,1]^d\), the maximum entropy distribution is the probability distribution which maximizes

The problem stated above is convex, so it can be solved efficiently in the number of parameters. But as the problem is currently stated, there are \(2^d\) parameters. Thus, it could take exponential time in the dimension of the data to solve. To reduce the optimization problem down to polynomial time in the dimension of the data, the problem can be restated as a minimization problem (its dual) with only \(d\) variables:

Solving this dual optimization problem in polynomial time is non-trivial, but it has been done in recent work. For the sake of brevity, we won’t state the dual or discuss specifics of this problem in this post.

Before we discuss the specifics of the maximum entropy framework can help debias data, we need to review two common fairness metrics.

Consider the feature domain \(\Omega = \Omega_1 \times \dots \times \Omega_d = \{0, 1\}^d\). (For simplicity, each attribute \(\Omega_i\) is binary, but these definitions can be adapted to multi-valued discrete attributes.) Partition the attributes into three classes where

Now, equipped with an understanding of max-entropy distributions and fairness metrics, we can discuss how to satisfy representation and statistical fairness constraints with a carefully chosen prior distribution and marginal vector.

Choosing a prior distribution

To determine how the prior distribution can satisfy statistical rate constraints, we can first think about the uniform distribution \(u\). Since

for any \(\alpha\), the statistical rate is

Let’s walk through an example to see how it works, using \(\tau = 1\). Consider the figure below.

On the left, the green icons are positive class labels (\(Y=1\)) and the pink icons are negative class labels (\(Y=0\)), while the circled icons are samples from the population. As in the algorithm, denote \(Z=0\) to be the underrepresented group with the female icons and \(Z=1\) to be the overrepresented group with the male icons. We can construct the following table for values of \(c(\cdot)\) and \(c(\cdot, \cdot)\).

so the prior distribution has a \(\tau=1\) statistical rate.

One might think that since it satisfies \(\tau\)-statistical fairness and resembles a reweighted version of the sample data, this construction of the prior distribution is itself a sufficient debiasing mechanism. However, finding the max-entropy distribution pushes the distribution towards the empirical distribution of the data while still satisfying fairness constraints.

Celis et al found that the novel max-entropy framework performs as well as or better than existing debiasing methods in finding a distribution close to the data — while attaining good representation and statistical rates simultaneously.

Using the prior distribution and marginal vector, the max-entropy framework is able to satisfy both representation rate and statistical rate fairness constraints.

How well does it do in practice?

The code for the algorithm is available on GitHub.

Data preprocessing to mitigate bias remains an important task across a range of applications. Celis et al’s paper leverages the maximum entropy framework, using a carefully chosen prior distribution and marginal vector to satisfy fairness constraints and remains close to the empirical distribution induced by the data. Further, their algorithm runs in polynomial time in the dimension of the data, rather than the size of the domain, unlike prior results. A key limitation of the paper, however, is that the framework applies only in discrete domains. Future work might include extending the framework to continuous domains or to include fairness across “intersectional types” so that the data is unbiased for multiple independent protected attributes.

The ICML version of the paper is here and the full version is available on arXiv.

Chris Hays is a Research Affiliate with the Computation and Society Initiative at Yale. He recently graduated from Yale with a degree in computer science. This article benefited from the feedback of Nisheeth Vishnoi and Elisa Celis.